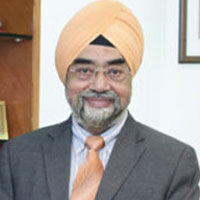 Amarjit Singh Chandhiok is a distinguished Indian Senior Advocate practising in the Supreme Court and High Courts in India. He was President of the Delhi High Court Bar Association for six terms, which is a record.

A former Additional Solicitor General of India, Amarjit was also Principal Counsel to the European Union Commission from August 2013 to March 2016. He is the only Indian lawyer to have held that position so far.

Amarjit is also President of Maadhyam, Council for Conflict Resolution, a professional organization aiming at excellence in the development of law and conflict resolution. He is Vice-Chairman of the Society of Insolvency Practitioners of India and a Member of the Advisory Committee of the Insolvency and Bankruptcy Board of India. Amarjit is also Chairman of the Working Group under the Insolvency and Bankruptcy Board of India.

Amarjit has been conferred many prestigious awards, including the National Law Day Award-2006 from the then Prime Minister of India, Dr. Manmohan Singh, for his contribution to the practice of Civil Law; and "Sikh of the Year 2010" by Sikh Forum International, London, UK.