The acceptability and wisdom enshrined in the Ayodhya verdict can be measured from the fact that none of the principal parties could find anything in the judgment to have a grudge with to even seek a review thereof...This is my first-hand view of a parallel backchannel of the resolution of the Ram Janmabhoomi-Babri Masjid dispute, the Ayodhya verdict of the Supreme Court, the healing touch,... 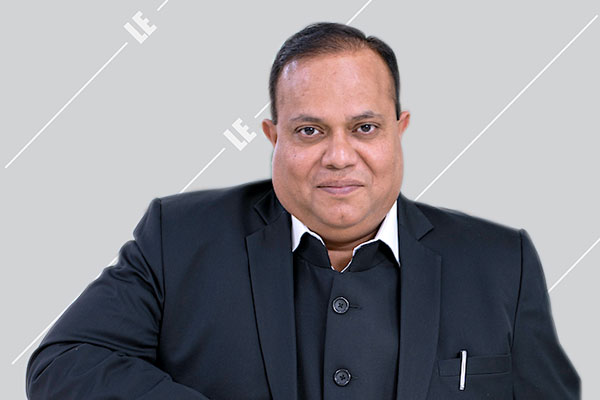 The acceptability and wisdom enshrined in the Ayodhya verdict can be measured from the fact that none of the principal parties could find anything in the judgment to have a grudge with to even seek a review thereof...

This is my first-hand view of a parallel backchannel of the resolution of the Ram Janmabhoomi-Babri Masjid dispute, the Ayodhya verdict of the Supreme Court, the healing touch, peace and its commercial implications on businesses in India.

This dispute, which was triggered by Mahant Abhiram Das placing idols of Lord Ram in the inner dome of the Babri Masjid on 22-23 December 1949, had since seen many claimants stepping forward on both sides, for various reasons. While the worship of the birthplace of Lord Rama reflected the belief of all Hindus, some claimed to title of some portions of the said land while others claimed a right to possession and development of the said birthplace into a temple.

After a failed attempt at mediation, the possibility of resolving the dispute amicably on principles of equity & constitutional values came across again when the Supreme Court once again permitted parties to resume mediation without affecting the ongoing day-to-day hearing and I was privileged to again work with the SC-appointed mediators: Sri Sri Ravishankar, former Justice F.M. Ibrahim Kalifulla and Sriram Panchu were swiftly back on the white board, as committed as before.

The beginnings on a hot summer morning in June 2019 when I had touched down at Lucknow to be greeted by Mahant Dharamdas for mediation meetings at the State guesthouse on the outskirts of Ayodhya, had been followed by countless fireside discussions and negotiations with the mediators, holy priests and saints in Ayodhya, Haridwar and Delhi.

As counsel for (i) Mahant Dharam Das, head of all Nirwani Akhadas and successor of Mahant Abhiram Das, the priest of the birthplace of Lord Ram from whom the government receiver tookover, and (ii) Mahant Rajendra Das, head of the parent body of all 9 Nirmohi Akhadas, the responsibility on me was to navigate through the legalese and to be a bridge between these holy souls and the mediation process towards resolution of the dispute.

Our determination and resolve to settle the disputes amicably came across from the mediators in their handling on (i) Need to see both sides feeling recognized and healed, (ii) Need to ensure that the issue be not allowed to be dealt with/without the involvement of all stakeholders as against individual claimants for a sustained resolution of the dispute, (iii) Need to have an inclusive resolution to the dispute, and (iv) Need to ensure that such disputes don't reoccur in other places of worship, and here remains a sense of equity and constitutional values. 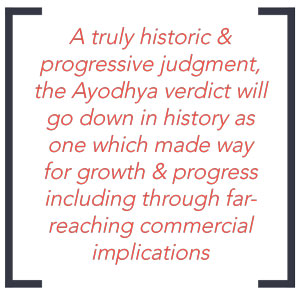 The deep efforts of the mediators as also those of Mahant Dharamdas, amongst others, made the closure of the dispute appear closer and clearer on the same equitable and constitutional principles discussed above.

As the proceedings closed and later the Supreme Court did pronounce its judgment, wherein it, (i) Upheld constitutional values and equity over legalities and religious interpretations, (ii) Entrusted Central Governments with the responsibility to set up a body/trust to develop and manage affairs of the said land instead of individual parties or private trusts to do so; (iii) Ensured an inclusive end of the dispute by recognizing the beliefs of both sides in the spirit of true Unity; (iv) Ensured that such disputes don't reoccur in view of the 1991 law protecting the places of worship.

As business Leaders hailed the judgment as 'historic' and 'courageous' and welcomed the onset of peace, harmony, trust and stability amongst the people of India, India stepped forward emerging stronger on short and long-term stability and business confidence. For long-term business interests, India remains and has reaffirmed its secular credentials as enshrined in India's Constitution.

At a bird's eye level, the implications of the judgment are both far and wide. Apart from tourism and hospitality being major potential gainers as Ayodhya offers a mustgo destination for tourists alongside the Taj/Agra, the widespread development of the region and its integration to major travel circuits will see big-ticket opportunities in construction, infrastructure and river development, to name a few. A new sense of stability would also make India more attractive for foreign capital, with the reduction of risk to capital following the judgment.

The Ayodhya judgment has delivered Rule of Law, Development & Freedom of right to belief by striking the right balance between healing touch, peace and stability.

The acceptability and wisdom enshrined in the Ayodhya verdict can be measured from the fact that none of the principal parties could find anything in the judgment to have a grudge with to even seek a review thereof. A truly historic & progressive judgment, the Ayodhya verdict will go down in history as one which made way for growth & progress including through far-reaching commercial implications.