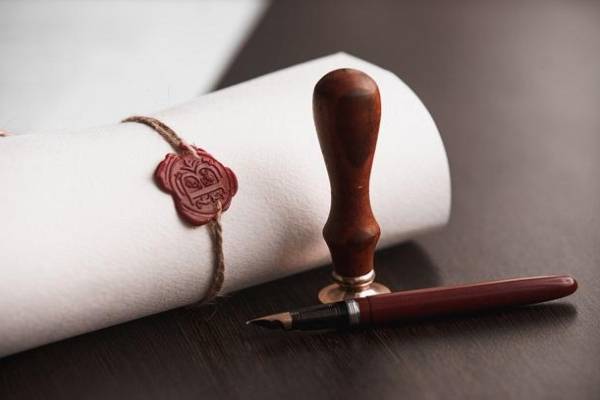 It will be interesting to see how the US Courts react to this decision of the Delhi High Court...

In a recent case of HT Media Limited & Anr. (Plaintiffs) versus Brainlink International, Inc. & Anr. (Defendants), the Delhi High Court listed the criteria for granting an anti-suit injunction. The suit was instituted by HT Media Limited to seek a permanent injunction against Brainlink International, Inc. from using the domain name www.hindustan.com and/or any other mark which is identical or deceptively similar to the Plaintiffs' trademarks HINDUSTAN and/or HINDUSTAN TIMES.

Briefly touching upon the facts, Plaintiffs had sent a cease and desist Notice in December, 2019 to the Defendants for the purpose of acquiring the Domain name in response to which the Defendants quoted whopping amount of USD 3 million to sell the Domain name. When the Plaintiffs made a counter offer, the Defendants filed a Declaratory Suit for non-infringement against the Plaintiffs for non-infringement before the United States District Court for the Eastern District of New York [Brainlink International, Inc. v. HT Media Ltd. & Anr. (Civil Action No.1 20-cv-01279)] in March, 2020. This gave birth to the instant suit before the Delhi High Court, wherein the Plaintiffs also sought a permanent injunction against the Defendants from proceeding with this suit in the United States.

While restraining the Defendants and their agents from using the domain name www.hindustan.com or any other mark identical/deceptively similar to the Plaintiffs' trademarks HINDUSTAN and HINDUSTAN TIMES, the Court also granted the anti-suit injunction to the Plaintiffs, thereby constraining the Defendants and their agents/representatives from proceeding before the United States District Court.

The first and foremost issue that arose was that of the jurisdiction of this Court in granting an injunction against the infringement of the trademarks of the Plaintiffs as well as in granting an anti-suit injunction, considering the Defendants were based in the United States.

As far as the relief with respect to infringement/passing off was concerned, the Court held that the Plaintiffs had correctly relied upon Section 134(2) of the Trade Marks Act, 1999, as the said provision provides that in cases of infringement of trademark, the Plaintiff can institute a suit in the jurisdiction of the Court where it carries on its business. Considering the fact that the Plaintiffs had a registered office in Delhi and that they carried their business therein, the jurisdiction of this Court was rightly upheld.

In respect of the granting of the anti-suit injunction, the Court placed reliance on the judgment passed in the case of Modi Entertainment Network & Another v. W.S.G. Cricket Pte. Ltd., (2003) 4 SCC 341 wherein the Supreme Court laid down the principles for grant of the same, as elucidated below:

"24. From the above discussion, the following principles emerge:

(1) In exercising discretion to grant an anti-suit injunction, the court must be satisfied of the following aspects:

(a) the Defendant, against whom injunction is sought, is amenable to the personal jurisdiction of the court;

(c) the principle of comity – respect for the court in which the commencement or continuance of action/proceeding is sought to be restrained – must be borne in mind.

(2) In a case where more forums than one are available, the court in exercise of its discretion to grant anti-suit injunction will examine as to which is the appropriate forum (forum conveniens) having regard to the convenience of the parties and may grant anti-suit injunction in regard to proceedings which are oppressive or vexatious or in a forum non-conveniens. ...

(3) The burden of establishing that the forum of choice is a forum non-conveniens or the proceedings therein are oppressive or vexatious would be on the party so contending to aver and prove the same."

Reliance was also placed on the case of India TV, Independent News Service Pvt. Ltd. v. India Broadcast Live LLC & Ors, 2007 SCC OnLine Del 960, wherein the Court while probing a similar issue regarding passing off a domain name by a Foreign Defendant stayed the proceedings instituted by the Defendants before the Arizona District Court on the ground that since the Plaintiff's News Channel was broadcasted for Indian audiences, the damage to the goodwill and reputation of the Plaintiff's would also be only in India, thereby stating that the Defendant was amenable to the personal jurisdiction of the Court. As such, in the instant case, the Court perused as to how the inaccessibility of the website of the Defendants would confuse the Indian audiences who are diverted to the Defendants' website leading them to believe that the Plaintiffs have taken down their websites, thereby impairing the goodwill and reputation of the Plaintiffs. In view of this, the Court decided that it could rightly exercise its jurisdiction over the Defendants. 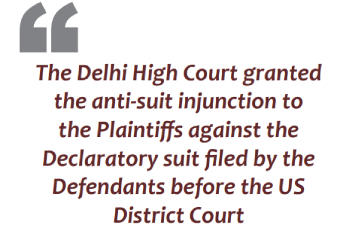 As far as the infringement of the trademarks was concerned, the Court was of the opinion that the domain name registration by the Defendants was made in bad faith considering that they were not using the domain name for any legitimate purpose in conjunction with the fact that they offered to sell the said domain name to the Plantiff for an exorbitant amount. The domain name seemed to have been registered only to reap monetary profits.

Further, the suit filed before the Eastern District of New York was considered as oppressive since the Plaintiffs neither asserted any trademark rights in the US nor carried on any business therein. In view of the above, the Plaintiffs made out a prima facie case for grant of an anti-suit injunction before this Court.

As such, the Court while allowing ex-parte injunction restrained the Defendants and anyone acting on their behalf from using the domain name www.hindustan.com or any other mark identical/deceptively similar to the Plaintiffs' trademarks HINDUSTAN and HINDUSTAN TIMES till the next date of hearing. In addition, the Defendants were also restrained from creating any third party rights in the domain name www.hindustan.com and the registering authority of the said domain name was directed to block the said domain name till the next date of hearing. Further, the Defendants including their agents and representatives were prevented from proceeding with the suit titled Brainlink International, Inc. v. HT Media Ltd. and Another (Civil Action No.1 20-cv-01279) before the United States District Court for the Eastern District of New York and also from instituting/filing any suit, applications, proceedings in any Court of Law or Authority, in relation to the disputed domain name or any other issue which formed the subject matter of the instant suit, till the next date of hearing.

Treading the path of anti-injunction seems to be a tricky one as the Courts have to exercise caution when it comes to dealing with foreign jurisdictions for granting such kind of injunctions. It will be interesting to see how the US Courts react to this decision of the Delhi High Court in granting of the anti-suit injunction.

Manisha Singh, Founder and Partner, LexOrbis, is known and respected for her deep expertise in prosecution and enforcement of all forms of IP rights and for strategizing and managing global patents, trademarks and design portfolios of large global and domestic companies. She is also known for her sharp litigation and negotiation skills in both intellectual property and non-intellectual property litigations and dispute resolution and is known for using out-of-the-box strategies. Ms Singh played a crucial role in advising and apprising Indian policy-makers and law-makers on global standards associated with intellectual property administrative and enforcement systems.

Mahima Madan is an Associate at the firm and has done a course on ‘Intellectual Property Rights and Information Technology in the Internet Age’ from Indian Law Institute. At LexOrbis, her work profile includes handling of trade mark matters (prosecution/contentious/non-contentious), domain name complaints for a diverse client portfolio involving multinational corporations, pharma companies, technology start-ups etc. Mahima has also worked on copyright related matters including drafting of concept notes, and advising clients on matters related to Real Estate and Legal Metrology. She has gained substantial experience in such a short span of time and has the acumen to deal with variety of cases in all the domains of IP law.