Rwanda - The Rising Star in Africa 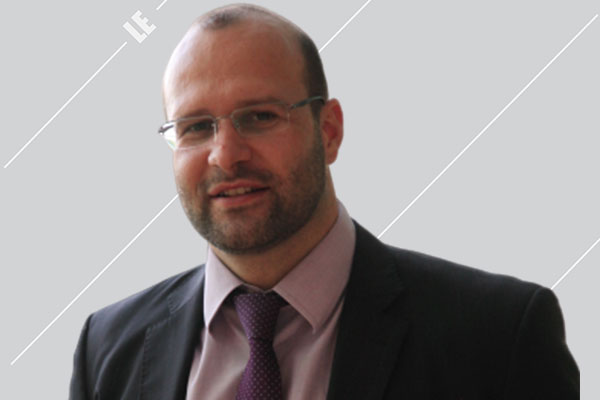 Since the end of Rwanda's genocide, preluded by President Kagame's Rwandan Patriotic Army (the military wing of

the Rwandan Patriotic Front ("RPF")) in July 1994, the small landlocked and densely populated country of 12.8

million. inhabitants located within the African Great Lakes maintained largely political stability enabling substantial economic growth. The introduction of the program of national unity and reconciliation – the National Unity and Reconciliation Commission ("NURC") in 1999 by the RPF, aimed to establish a unified Rwandan identity

After President Kagame's election as Rwanda's new President in 2000, he managed to implement significant political reforms such as "Umuganda," a mandatory day of community service bringing together Rwandans from various communities and from different social backgrounds held on the last Saturday of every month and promoting national unity and reconciliation. Initiatives of this sort were essential for nation building and overcoming the aftermath of the horrendous genocide. Other policies of President Kagame's focused on reforming the healthcare sector through decentralization - building hospitals in rural areas and promotion of gender equality and participation of women in the political and private sector. Thereby parliamentary elections in September 2018 saw women fill 64% of the seats.

Domestically, most of the Rwandans consider President Kagame as a guarantor of domestic political stability and security. Foreign politicians and human rights groups, however, often criticize the President for his autocratic and undemocratic way of governing and restricting opposition parties. Despite criticism on his leadership style, he is one of the most charismatic African leaders safeguarding stability for his country and fostering forward thinkingreforms copied often by neighboring countries. During his tenure as African Union (AU) chair between January 2018 and February 2019, he pushed for vital financial and administrative reforms of the AU. Though Rwanda could reinforce a strong political position within central Africa, smoldering security incidents continued to strain Rwanda Uganda and Rwanda-Burundi relations in the recent past. With President Kagame's re-election to a seven-year term in the August 2018, following an amendment to the constitution in December 2015 and allowing him to serve a third term, it can be assumed that he will continue on his reform path and promote forward-thinking political and economic policies fostering domestic stability, reconciliation

Rwanda belongs to the group of the four fastest growing economies in the world in 2019, besides Côte d'Ivoire,

Ethiopia and Ghana, all located in Africa.1 Rwanda's exceptional economic growth is a result of consequent

the Economic Development and Poverty Reduction Strategies and National Strategy for Transformation ("NST1") which enabled robust economic and social performance. Thereby, Rwanda's economy expanded at a real rate of 8.6% in 2018

and is projected to remain strong in 2019 at 7.8% and over the medium term at around 8%. The country's substantial economic growth is supported by quickly growing service, industry and particular manufacturing sector. Growth will be bolstered by the government's continued implementation of its NST1, which has already resulted in strong investment inflows, diversified exports, and more resilient agriculture. Other large investments, such as Bugesera airport, Hakan peat plant, and electricity infrastructure, will additionally promote growth. Over the longer term, extensive private and government investment in manufacturing, tourism, agriculture, ICT, health and education, among others, should indeed transform the Rwandan economy into higher value-added activities, and boost per capita incomes and living standards.

Given Rwanda's promising economic indicators and the government's commitment to continue to pursue its dynamic economic policies, it can be expected that Rwanda's economy will continue to outperform most of the continents' economies in the future. 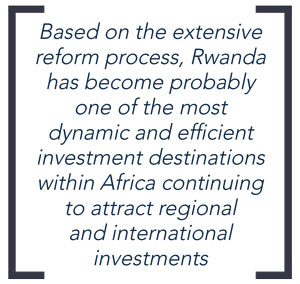 Rwanda's current legal system is a mixed system based on German and Belgian civil law as well as customary law.

After the genocide, the country embarked on an extensive legal reform process whereby various laws in all legal

economy and new social realities. As part of the legal reform process, the Rwandan government initiated the

drafting of a revised modern constitution3 of the Republic of Rwanda which was adopted by referendum on 26 May 2003 and entered into force on 4 June of the same year providing for a clear separation of powers and a strong commitment to protection of fundamental human rights. Indeed, the new Rwandan constitution provides the recipe and base for good governance standards essential for promoting crucial economic, political and social policies within the country.

During the modernization process of the country's investment framework, the Rwandan government created in 2009 the Rwanda Development Board ("RDB"), a government authority which serves as a one-stop center that facilitates granting company registrations, licenses, tax registration, land title deeds and work permits among other crucial investment services to enable investors to start smoothly and timely their business operations. The RDB provides an efficient and probably the quickest business registration process4 within Africa whereby investors can apply entirely through an online platform5 and may obtain their required business license within less than a day. Key legislation for investments in Rwanda is the Law relating to Investment Promotion and Facilitation (N° 06/2015 of 28/03/2015)6 ("Investment Law") implemented and administered by the RDB. The Investment Law does not only provide far-reaching protection of general investor rights, investors capital, intellectual property and repatriation of investor capital and assets, but also provides for effective dispute resolution. Depending on the fulfillment of respective investment criteria, the Investment Law grants substantial non-fiscal and staggered fiscal incentives, such as preferential corporate income tax rates from 0% to 15%, corporate income tax holiday from 5 up to 7 years, exemption from capital gains tax and customs, value-added tax refund and immigration incentives among others.

Based on the extensive reform process, Rwanda has become probably one of the most dynamic and efficient investment destinations within Africa continuing to attract regional and international investments. The RDB registered investments worth US$ 2.46 billion in 2019, an increase of 22.6% from the previous year. In 2018, RDB registered investments worth US$ 2.01 billion. Rwanda's strong economic performance and dynamic investment framework has caught the attention of the German car manufacturer VW, which established a new car manufacturing plant in Kigali and produced their first domestically build car in 2018.7 The German automaker plans to reach annual production of 5,000 cars in the first phase.

estate sector to mention few of the investment options. In 2019, energy and manufacturing accounted for 75%

of all investments registered (45% and 30% respectively). Other sectors that attracted significant investments were

construction, agriculture, services including ICT as well as mining.

The optimal set up and market entry structure depends largely on investors' risk appetite and type of investment. Common structures can be any of the domestic (limited liability) companies such as company limited

by shares, company limited by guarantee, company limited by both shares and guarantee or unlimited company or the establishment of a branch of a foreign company in case a local presence is required to operate the business. Another option might be to enter into an agent, distributorship or franchise relationship with a well-reputed local trading house which sells the products or merchandise through established sales channels in the domestic or regional markets. This option would be less capital intensive and gives the opportunity to understand the market first before deploying large investments with significant assets and working capital.

Gregor Pannike, LL.M., MBA (Attorney-at-law | Rechtsanwalt) founder and managing director of Agema Analysts advises on Institutional & Corporate Risk and Political Risk & Intelligence Analysis. Gregor worked for the German Federal Foreign Office in the Embassy in Sana’a, Yemen and later on he worked as an attorney-at-law in private practice within the Middle East and Africa. Before founding Agema Analysts, Gregor worked as a general counsel for a reputable family conglomerate in the UAE for 8 years. He has more than 15+ years of profound advisory experience in the field of legal structuring, investments and market entry, corporate and commercial transactions as well as political and economic analysis within the Middle East and Africa. Gregor is admitted to the German bar association and to the courts of Germany.