The New Age of Medical Education in India

The National Medical Commission (NMC) Act has made several structural departures from the IMC (Indian Medical Council) Act with a view to improve accountability and transparency...Touted as one of the biggest reforms in the Indian medical education sector, the promulgation of the National Medical Commission Act, 2019 ("NMC Act") has exhibited the Central Government's intention to improve... 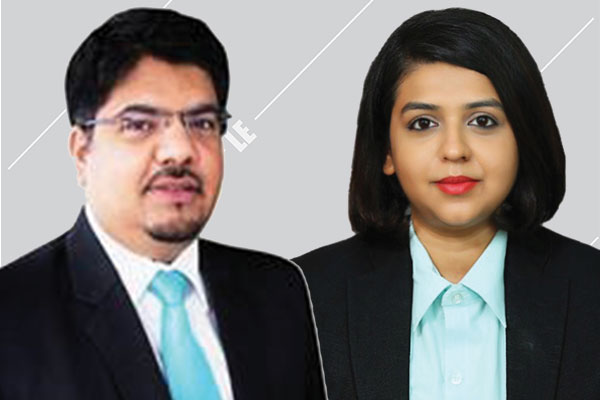 The National Medical Commission (NMC) Act has made several structural departures from the IMC (Indian Medical Council) Act with a view to improve accountability and transparency...

Touted as one of the biggest reforms in the Indian medical education sector, the promulgation of the National Medical Commission Act, 2019 ("NMC Act") has exhibited the Central Government's intention to improve access to quality and affordable medical education, and ensuring the availability of adequate and high-quality medical professionals in India. The NMC Act has met with widespread protests from the medical practitioners' community, who may have well founded concerns over certain provisions of the NMC Act.

The Medical Council of India ("MCI"), a statutory body reconstituted under the IMC Act for establishing uniform and high standards of medical education in India, was dissolved in 2018 amidst corruption charges against its president by the Central Bureau of Investigation. The MCI was temporarily superseded by the Board of Governors through an ordinance for the governance of medical education in India and will continue to be in force, till the constitution of the National Medical Commission ("NMC"). While the IMC Act has been repealed by the NMC Act, Section 61 of the NMC Act clarifies that notwithstanding the repealing of the IMC Act, the educational standards, requirements and other provisions of the IMC Act, and the rules and regulations made thereunder, shall continue to be in force and operate, till new standards or requirements are specified under the NMC Act or, new rules or regulations are made thereunder. 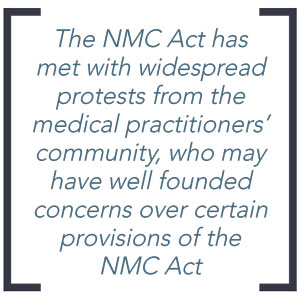 The NMC Act has made several structural departures from the IMC Act with a view to improve accountability and transparency. The intent of the legislature clearly was to create a multi-layered structure since constitution of five different bodies have been prescribed under the NMC Act that will assist the NMC to regulate the medical education sector. As per Section 4(1), the NMC shall consist of 33 members, including one Chairman, 10 ex-officio members and 22 parttime members. Out of the 22 part-time members, a total of 19 members will be nominated by the States and Union Territories. A Search Committee has also been prescribed under Section 5(2) for filling up of the NMC vacancies. Unlike MCI members, as per Section 6(6), the members of the NMC will have to declare their assets and liabilities at the time of entering and demitting office. They will also have to give a conflict of interest declaration of professional and commercial engagements, or involvements and these are to be displayed on the NMC website. Moreover, the NMC members will also have a two-year coolingoff period after their tenure during which they cannot be employed in any capacity, including as a consultant, or as an expert in any private medical institution whose matter they might have dealt with directly or indirectly. This cooling-off period, however, can be waived off by the Centre.

The composition of the NMC has been a matter of great political debate, where the opposition parties have alleged that since 14 out of 33 NMC members will be appointed by the Central Government, it will lead to favoritism and bureaucratic interference. Further, the medical practitioners' community has raised issues with respect to NMC members being nominated rather than elected. In our view, the NMC Act has significant checks and balances to counter the subjective criticism of this and only time will be a test of proper and effective governance of medical education under the NMC.

The NMC Act also provides for the constitution of the Medical Advisory Council, which shall act as the link between the Centre and the State and through which the States and the Union Territories can raise their concerns and put forth their views to the NMC. Further to the said council, the Central Government shall also constitute four different autonomous boards all with different functions:

(i) Under-Graduate Medical Education Board – For determining the standards of medical education at undergraduate level and the minimum requirements and standards for conducting courses and examinations for undergraduates in medical institutions.

(ii) Post-Graduate Medical Education Board – For determining the abovementioned board's function at the postgraduate level.

Keeping up with the overhaul of all existing practices, the process of becoming a medical practitioner has also been revamped. As per Section 14, there will be a National Eligibility-cum-Entrance Test for admission into undergraduate and postgraduate courses. Further, instead of being granted a license upon passing the final examination of their respective colleges, medical students all across the country will have to now appear for a common final year undergraduate medical examination – the 'National Exit Test' ("NEXT") to be granted a license to practise medicine as medical practitioners and for seeking admission to post-graduate medical courses pursuant to Section 15. Interestingly, someone with a foreign medical qualification will also have to qualify the NEXT for practising in India. This essentially means that even a quality degree from a reputable medical institute abroad won't be sufficient qualification, as opposed to the previous system whereunder, degrees obtained from certain universities accredited by the MCI were acceptable to be granted license to practice medicine in India. Having said the above, there is, however, a buffer period provided under the NMC Act to foreign citizens who are enrolled in their country as medical practitioners, wherein they will be granted temporary registration in India for such a time period and in such a manner as may be specified. However, it is an unusual provision that would create a difference between Indian students who make large investments to study abroad and obtain foreign degrees and foreign nationals who obtain the same degrees at much cheaper rates. Perhaps, this is a minor oversight and might be eventually amended, however, if this was indeed the objective which the lawmakers had in mind then it should surely be reasoned out.

A major point of contention for a lot of medical professionals has been the introduction of the provision where the NMC is allowed to grant a limited license to such persons fulfilling the (to be) prescribed criteria and connected with modern scientific medical profession to practice medicine at midlevel as a 'Community Health Provider' ("CHP") (Section 32). The CHP can only prescribe specified medicine in primary and preventive healthcare. Although presumably there would be proper guidelines and criteria that would be prescribed later in the regulations, there is also the strong possibility that this could lead to more 'quacks' entering the profession because at grassroot level there is a chance of specifications being overlooked and in the long run, unless properly supervised and regulated, the idea of having CHPs might not be effective. Having said that, the idea behind introducing CHPs would benefit the economically lower strata of society who often do not have access to primary healthcare within their vicinity and would also help in employment generation.

Another significant function of the NMC is framing of guidelines for determination of fees and other charges in respect of 50% of the seats in private medical institutions and deemed institutions (Section 10(1)(i)). Now, while this may come across as an equal platform for addressing both the Government and the private sector's issues in relation to reservation of seats in private colleges, in effect this could instead of creating a level field for aspiring medical students lead to a bigger divide wherein the remaining 50% seats could be reserved for the highest paying aspirants. This would not only lead to dilution of talent but also promote a culture where only the affluent section of the society has a brighter chance of pursuing a career in medicine. Ideally, there should have been a capping on the fee charged by the unaided medical institutions to prevent such dilution of talent.

One noteworthy omission from the NMC Act is the absence of any provision dealing with violence against doctors and property of healthcare establishments. Faced with sustained pressure from the medical practitioners' community, the Ministry of Health and Family Welfare, on September 2, 2019 published the draft of a proposed legislation titled 'The Healthcare Service Personnel and Clinical Establishments (Prohibition of Violence and Damage To Property) Bill, 2019' to address the issue of violence causing injury/danger to the lives of healthcare service personnel, and damage and loss to the property of clinical establishments.

While backlashes and protests in re-setting an established regime is not unusual, we certainly believe that the NMC Act is a progressive and promising legislation, and if implemented appropriately, would bring about positive changes leading to transparency and accountability in the field of medical education in the country.