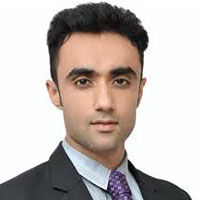 Arush Khanna (MCIArb, MMIArb) is an Advocate & Legal Consultant enrolled with the Bar Council of Delhi. He started his practice in 2012 after graduating from the Symbiosis Law School, Pune and has also done his Masters (Business Laws) from the National Law School of India University, Bangalore. He is the fifth generation lawyer in a family of highly respected lawyers.

After having worked in M/s Karanjawala & Co. and in the chambers Mr. Sanjeev Anand, advocate at the Delhi High Court, Arush started his independent counsel and advisory practice in New Delhi before co-founding Numen Law Offices. The firm, with offices at Delhi and Mumbai provides services in the fields of Dispute Resolution, Arbitration, Antitrust, Insolvency & Bankruptcy (IBC) and Criminal Litigation.

Arush specializes in Commercial Disputes with a key focus on Arbitration, IBC and Antitrust. The list of clients, he currently represents and advises include fortune 100 companies such as the Lenovo Group and Motorola Inc. and other multinational companies such as Corning and TGI Fridays etc.

In addition to his commercial assignments, Arush also acts as counsel for charitable institutions such as the Missionaries of Charity, Indian Cancer Society and is also empanelled with the Delhi High Court Legal Aid Committee.

Arush was appointed as India’s National Representative at the Young Lawyers Committee of the International Bar Association; conferred the “Young Achievers Award of the year (30 years or below)” for the year 2017 by the Legal Era group; conferred the award in the “Young Achiever” category at The New Age Economic Laws Summit & Achiever Awards in 2019.

Arush was appointed to the Core-Committee of the Young Members Group of the Chartered Institute of Arbitrators (CIArb India); appointed to ‘Law & Justice Committee’ of PHD Chamber of Commerce; appointed as the “Bar Executive Officer” of the Society of Indian Law Firms before the Bar Issues Commission of the International Bar Association and was Member of the Governing Council, Bar Association of India (2016-2018).

In 2017, he was selected as a Scholar from India to attend the annual conference of the International Bar Association in Sydney, Australia. He is member of the Chartered Institute of Arbitrators (MCIArb) & the Malaysian Institute of Arbitrators (MIArb); empanelled with the Delhi High Court Legal Services Committee that provides free legal aid to the underprivileged citizens.

Arush is also heavily involved with academia and professional development programs. In 2015, he successfully completed the “Chinese Law Program for Legal Talents in BRICS Countries” from the East China University of Political Science and Law. He has completed an advance training course organized by the Singapore International Arbitration Centre (SIAC) on the “Techniques and Procedures of Arbitration and Mediation”. He has authored several articles that have been published in various reputed international and local law journals including the Inter-Pacific Bar Association Journal, India Law Journal, Lex Witness and Legal Era.