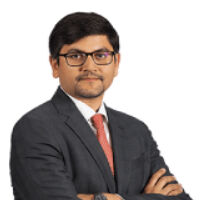 Ashwin Bishnoi is an Partner in the corporate team in the Delhi office of Khaitan & Co. Prior to joining the firm, he worked at Skadden, Arps, Slate, Meagher and Flom LLP for four years in their New York and London offices, respectively.

He focuses on corporate and commercial transactions, such as mergers and acquisitions, joint ventures, offering of convertible and non-convertible debt, and corporate re-organizations.