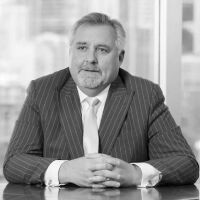 Ian De Witt was born in Wales and obtained an honours degree in law in London. After qualifying as a solicitor in England and Wales in 1989, he joined and became a partner in a prominent London law firm where he worked for many years before coming to Hong Kong in 1996.

Throughout his career, Ian has focused on commercial litigation and insolvency matters, including debt recovery, asset tracing and the enforcement of judgments, pre-emptive actions such as injunctions, court appointed receivers, and the appointment of provisional liquidators. He acts and advises in a variety of insolvency cases, acting for liquidators, receivers, creditors and directors.

Ian has also advised and acted for directors, employees and companies in respect of investigations, regulatory matters and prosecutions carried out by the Police, the Independent Commission Against Corruption (“ICAC”), the Commercial Crime Bureau (“CCB”), the Securities and Futures Commission (“SFC”) and the Confederation of Insurance Brokers (“CIB”) Disciplinary Committee.

Additionally, he has advised and acted in a wide range of commercial and contractual disputes, professional negligence claims, partnership and shareholder disputes.

Ian is also an accredited mediator of the Hong Kong International Arbitration Centre and he sits on the Insolvency Committee for the Law Society, technical and editorial committee of the Restructuring and Insolvency Faculty of Hong Kong Institute of Certified Public Accountants.