Ahead of IDFC becoming a bank on October 1, Legal Era spoke exclusively to Group General Counsel & Group Head – Legal, Dr Rajeev Uberoi, to get to know more about the NBFC's journey thus far and the road ahead - by Madhavi Gokhlay...Last year, IDFC was among the privileged two out of 25 contenders to get Reserve Bank of India's in-principle nod for a new banking license. The approval... 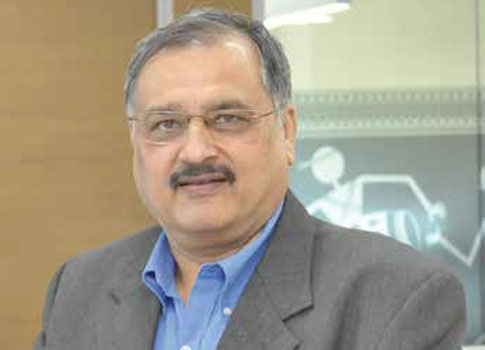 Ahead of IDFC becoming a bank on October 1, Legal Era spoke exclusively to Group General Counsel & Group Head – Legal, Dr Rajeev Uberoi, to get to know more about the NBFC's journey thus far and the road ahead - by Madhavi Gokhlay...

Last year, IDFC was among the privileged two out of 25 contenders to get Reserve Bank of India's in-principle nod for a new banking license. The approval was valid for 18 months during which, the NBFC would have to comply with RBI requirements involving several aspects of legal structuring. A jubilant IDFC reportedly announced that it would become the best capitalised start-up bank in the country in recent decades and aim to build a universal banking franchise.

With the deadline just round the corner, ARA Legal Media Group's Legal Era Magazine decided to catch up with IDFC Group General Counsel & Group Head – Legal, Dr Rajeev Uberoi, to get some insights as

to how the NBFC, especially its legal team, rose to the challenge. Busy with back-to-back meetings, a visually excited Dr Uberoi settled down to speak to us. From a NBFC to a bank, what was the journey like, we asked, to which he instantly replied: "We are still on the journey and haven't reached our destination. So, I am really not in a position to reflect and say how it has been." Yes, the past 18 months had been extremely challenging and for him, personally satisfying. From a NBFC with a huge balance sheet, they had to meet all regulatory requirements and

become a bank. Legally speaking, it was an experience in itself.

Did the legal team buckle under pressure? "I have a very charged and motivated team which has always come up to the expectations of the company

whenever we changed," quipped Dr Uberoi. For the past seven years or so, IDFC had evolved as a full financial sector company. They were of the view that unless an organization updated its offerings and skills, it was difficult to survive. So, apart from their core competency of infrastructure finance, they had steadily diversified into other verticals like private equity, asset management and securities to name a few. Hence, the legal team was geared to take up newer challenges and come up to expectations, even when it came to becoming a bank. Part of this involved upgrading skillsets and the other part implied recruiting people where specialisation was necessary.

"I never had a large team which allowed me to give people an opportunity to change their skillsets. If you

have a very large team, it is difficult. So, most people working with IDFC were able to acquire the skills to realign themselves to the challenge," informed Dr Uberoi. He added that he wanted to give people working with IDFC a chance before hiring from outside. Yet, each team member was asked what their area of interest was before assigning new responsibilities. Those with prior banking experience were able to deliver but they too were consulted before being put on particular tasks. Indeed, the team took it in the right spirit and came out a winner but it was an uphill task alright, what with three parallel challenges: sustaining IDFC's original business, going through the demerger, and preparing to become a bank. Wherever a gap was identified, specialists were hired.

So, was a lot of hiring done? "We were 18 people when we started off. We are in process of hiring and there are eight people in the pipeline who will be joining soon. I expect the number to go even higher, reason being we are no longer only Mumbai-centric. We are looking at 200 to 300 branches at least, with one or two people providing legal support in every region," said Dr Uberoi. 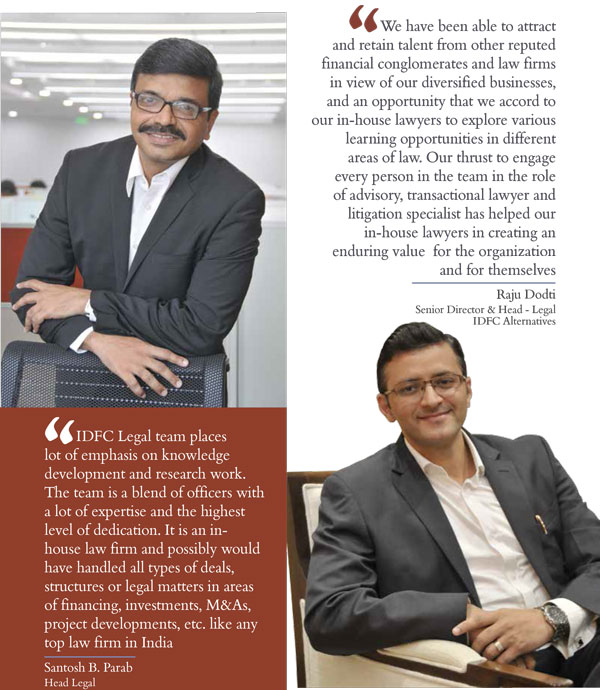 Could they now be called a law firm in their own right? "We always functioned like a law firm and not an in-house legal department. We always had benchmarks and standards akin to a law firm," he asserted, going on to elaborate how when he took over, his vision was not to run the show like an in-house team where people sat around and waited for business to come to them. For the past six or seven years, they had functioned like a law firm. Whenever there was a potential need for a particular legal skill, they had gone ahead and brought people on board rather than telling the client they could not do the job because they lacked expertise for it. They had gone so far as to develop systems to keep track of the knowledge and efficiency quotient of their team members.

Besides, they had enough and more areas of specialisation to be called a law firm in their own right. For instance, in the past six to seven years, the private equity funds under management had risen to more than USD 3.2 billion. They had also branched out into M&A and those skills came in handy, given the RBI mandate to merge at least five entities. Similarly, they had diversified into fund-raising as they were already raising nearly '20,000 crore every year for the past four years which included, from 2010, ECBs as well.

After becoming a bank, how would costs be managed? A bank's needs were totally different from those of a NBFC. So, say an agreement for a road project worth '800 crore would be drawn up in-house as well as dedicatedly to contain costs whereas a loan agreement for a car worth '5 lakh would be drawn up in-house and dedicatedly with the rider that the team could get external help if required. In case of cost-inefficient commoditised products though, say, a well, it would not be desirable to draw up loan agreements in-house. So, though they had the wherewithal of a law firm, it was understood that external help could be taken wherever necessary as even law firms did the same.

Replying to what lay ahead for IDFC, Dr Uberoi stepped back to explain why they had chosen to become a bank in the first place. As a NBFC, they had a term loan book, a fixed interest rate, and were being used as lenders while their customers were giving all the ancillary business with higher returns to other banks. In going for a banking license, they would only be adding to what they were doing earlier, providing a larger suite to their customers, and most importantly,

getting a share of their customers' wallets on these businesses too that were more feebased than fund-based. In the next five years, they wanted to be in the league of leading private sector banks. "We want to become a bank, get business, open branches… have close to 500 branches in the next five years…" said Dr Uberoi. While they were still grappling with whether the focus on infrastructure finance would continue as before, they would not move away from their core competency, rather do it on a selective basis going forward. 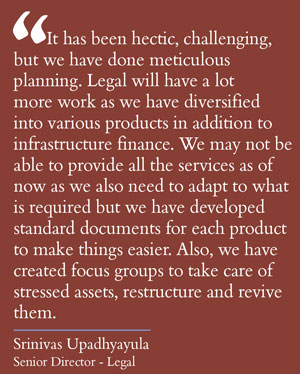 To a question about competition from established private sector banks, Dr Uberoi replied, "I am very optimistic; if you are good in your offering, your service standards are good and you decide to be on top, there is no reason you won't. When the whole economy is expanding, everyone has the ability and opportunity to get their share. Secondly, many yester-year banks might be losing their edge and when I say that, I mean purely from the obsolete aspect of technology. That would help banks like us with the latest technology to get their share of business."

So what has customer response been like? "They are very excited and have been kind enough to give us inputs on how to structure our business…" concluded Dr Uberoi.