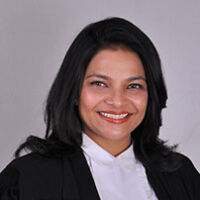 An alumna of the prestigious LSR College, Delhi and the Faculty of Law, University of Delhi, Kaadambari began her career as a litigator in 1998.

In the past, besides various multinationals, including a few foirtune 500 companies, she has also represented the Indian Air Force, State of Haryana, Punjab State Electricity Board, Haryana State Industrial & Infrastructure Development Corporation, CCS-HAU University (Hisar) amongst others, where she has argued complex and significant matters of public importance with considerable success.

As a lead counsel, Kaadambari has been at the forefront of some of the top draw high value litigations (INR 500-1000 crores)and have successfully argued cases which have contributed to the development of legal precedents across different judicial fora, from the Supreme Court of India to various High Courts and Appellate Tribunals. The reported judgements in her cases are often circulated by the legal media such as Bar & Bench, Live Law, and other general print and electronic media.

In infrastructure and construction sector, as well as real estate, she has successfully argued many cases relating to tenders, blacklisting of companies, debarment of companies by public organizations as well as World Bank, arbitrations, Conciliations and Mediations. She also advises large corporates in putting together effective enterprise risk management frameworks, rendering support on international sanctions and implementation of International Integrity Compliance Programmes.

An elected member of the Delhi High Court Bar Association from2014 to 2017, and now as part of the Managing Committee of India’s leading industry chambers (PHDCCI), she enjoys professional recognition both within the legal fraternity as well as the industry. She has served as an Independent Director on the board of companies from time to time (National Electricity Transmission Company (NETC) being a prominent one) and is a guest speaker at some of the top business chambers, industry associations and law schools in India. Giving creative expression to her professional capabilities, she has co-authored two books namely “Tis Hazari Nama” released by then Hon’ble Chief Justice of India in Nov, 2016 and “50 Years of Justice: Delhi High Court” released by the Hon’ble Prime Minister, Shri Narendra Modi in 2017.

Kaadambari also serve as the Secretary General of two NGOs namely Women in Law & Litigation (WILL) and AOL Foundation, besides which I have worked with a few international and Indian Charitable Trusts and NGOs.

Most recently in 2021, she has been honoured by the India Forbes “Legal Powerlist 2020”as India’s Top Individual Lawyer for excellence in law.