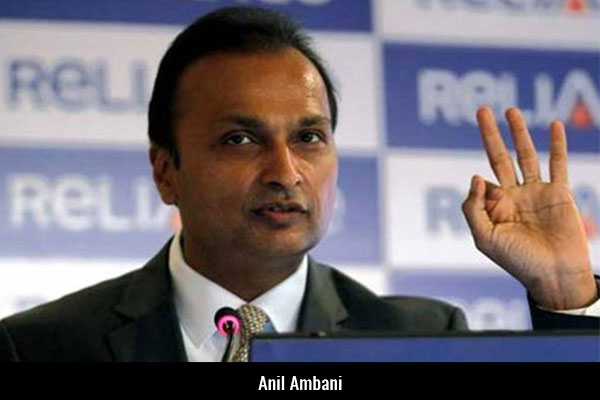 Anil Ambani has won a preliminary motion in a dispute with three Chinese banks seeking USD 680 million in defaulted loans extended to Reliance Communications (RCom) in 2012, but still suffered a setback after a London judge called his evidence “implausible and highly unlikely” ahead of a full hearing in 2020.

Justice David Waksman dismissed the application by the Chinese banks, and instead made a conditional order that Anil Ambani would have to pay all or some of the money to the court and also stand trial.

The date for a hearing to finalize that sum has been set for February 7, 2020.

“Anil Ambani will need to provide evidence ahead of that “as to his financial position and ability to make a payment into court. I consider that Ambani's evidence is inexplicably incomplete, implausible and highly unlikely,” Justice Waksman said.

Justice David Waksman also said there is “a plain case” to issue an order against Anil Ambani after the banks asked for him to deposit funds with the court before a London trial.

Industrial & Commercial Bank of China Ltd (ICBC), China Development Bank and the Export-Import Bank of China agreed to extend a USD 925 million loan to Ambani’s company, on the condition that he provides a personal guarantee, ICBC’s lawyer has argued earlier.

Anil Ambani, who was represented by his lawyer Harish Salve, stated that while he had agreed to give a non-binding “personal comfort letter,” he never gave any guarantee tied to his personal assets -- an “extraordinary potential personal liability.”

“I think it is highly probable that at trial his defense will be shown to be opportunistic and false,” Justice Waksman stated in his ruling.

Incidentally, the Chinese banks have asked Justice Waksman to force Anil Ambani to put up the full amount of the debt “or such other sum as the court consider appropriate” while the litigation continues, as per their court filings in the case.

However, Anil Ambani’s representative focused on the judge’s decision to dismiss the banks’ summary judgment application for an early ruling on the merits of the case.

“Anil Ambani has contested the proceedings and put up a strong legal defense, and will continue to contest the proceedings and seek leave to defend, without any conditions as to making of deposits or payments being imposed,” his representative said in a statement.

"Ambani's position that the claim made by the Chinese Banks in relation to his alleged guarantee for corporate loans availed by RCom could not be granted by way of a summary judgment has been duly upheld by the UK High Court,” the statement said.

According to Anil Ambani’s spokesperson, the court hasn’t had a chance to see all of the evidence yet.

“At this stage of the proceedings, the evidence of the personnel of RCom who were dealing with the personnel of the Chinese banks could not be placed, which led to certain doubts being expressed in the judgment on account of the evidence being incomplete and thus appearing implausible. Anil Ambani is confident that his position would be fully vindicated once all the facts and the entire evidence is before the court,” his spokesperson stated.

Meanwhile, the Chinese banks have issued a statement that they welcomed the granting of a conditional order.

“We have always said his defense is not credible. This is a straightforward debt claim to recover outstanding loans made to RCom in good faith and secured by a binding personal guarantee given by Anil Ambani,” the Chinese banks stated.