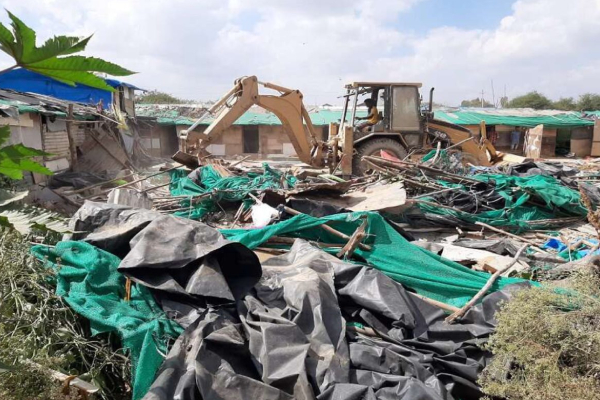 The Karnataka High Court warned the state of Karnataka of contempt proceedings if the state government failed to immediately come up with a comprehensive scheme to rehabilitate poor people whose shanties were pulled down in Bellandur area in January.

This observation of the Court came while dealing with a petition challenging the recent forceful eviction of thousands of migrant workers on the pretext that they were illegal Bangladeshi immigrants.

A division bench headed by Chief Justice Abhay Shreeniwas Oka reacted sharply to the government’s submission that the scheme could not be prepared due to Covid-19. The Court noted that the pandemic cannot be an excuse for all inaction.

The Bench stated that in normal course, it would have certainly slapped contempt charges on the authorities. However, the Bench finally decided to grant the State a final opportunity to come up with a scheme. The Court order read, “In normal course, today, the Court would have been justified in issuing notice of contempt to the Principal Secretary of the Revenue department. However, with a view to give one more chance to state government to comply with the order, direct the petition to be listed on September 24.”

The high court directed the state government to immediately come up with a comprehensive scheme to rehabilitate 351 poor people who had claimed rehabilitation and compensation.

The court had held it was not a case where any wing of the state had made an enquiry and had come to the conclusion that occupants of the shelters were illegal immigrants. In February, the court ordered the government to prepare a comprehensive rehabilitation scheme within a month. “Even as of today, the state has not come up with any scheme for rehabilitation. A large number of persons have been deprived of their shelters in gross violation of their right to shelter which is a part of the right guaranteed under Article 21 of the Constitution of India,” the bench said.

The bench observed that the excuse of Covid-19 was not available to the government when the court passed the first order about the rehabilitation scheme in February.

The court has now given the government time until September 24 to submit the scheme and warned of initiating contempt proceedings if the order is not obeyed.