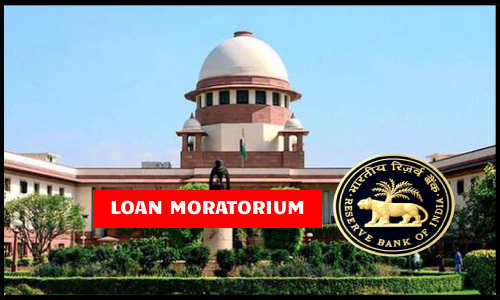 The Court directed banks not to tag any loans as non-performing till further directions. The Court has adjourned the case for the last time, granting the Centre, Reserve Bank of India (RBI) and banks two weeks to work together and file a concrete reply on their stand on waiving of interest charged during the moratorium period.

The interim order was passed by the Supreme Court bench headed by Justices Ashok Bhushan and comprising R Subhash Reddy and MR Shah while hearing a batch of petitions seeking waiver of interest, or waiver of interest on interest on the suspended EMIs during the extended moratorium period amid the nationwide lockdown due to the covid-19 outbreak.

The Court will continue hearing in the case on 28 September.

The three-judge bench took on record the submissions made by the Solicitor General Tushar Mehta, representing the Centre. The Centre informed the Court that an Expert Committee at the highest level had been constituted to look into all the issues which is considering all the issues in this batch of plea related to loan moratorium. The Centre has sought two weeks to take appropriate action.

The Court took on record the concerns raised by senior advocate Harish Salve for Indian Banking Association (IBA) with respect to individual borrowers apart from other sectors that individuals shall be adversely affected and decisions need to be taken through finance ministry and not just the RBI.

Senior advocate Kapil Sibal, representing Real Estates Associations, argued that the “downgrading of borrowers is still continuing. Borrowers must be protected against such downgrading.”

Salve and Mehta opposed the plea for downgrading and sought two weeks’ time to cater to this issue. Salve, while requesting the bench said, “Please don’t pass any orders on downgrading today because this is based on many factors. Companies will suffer.”

Senior Advocate CA Sundaram submitted that banks have now started debiting stating that there is no moratorium. “They say although we will not declare you NPA, your liabilities have started”. He added that the banks had started debiting 6 months interest.

The Court said that it is inclined to grant two weeks to file appropriate affidavit and clearly stated that it shall consider different prayers made by petitioners on the next date. All decisions taken by the RBI, Government of India or the banks would be placed before the Court for consideration.

On 3 September, the Supreme Court had passed an interim direction holding that the accounts not declared as non-performing asset (NPA) as on 31 August shall not be declared as NPAs till further orders.

The RBI had on 22 May extended moratorium on term loans till 31 August amid the nationwide lockdown due to covid-19. In March, the central bank had allowed a three-month moratorium from paying EMIs and other loans on payment of all term loans due between 1 March and 31 May.