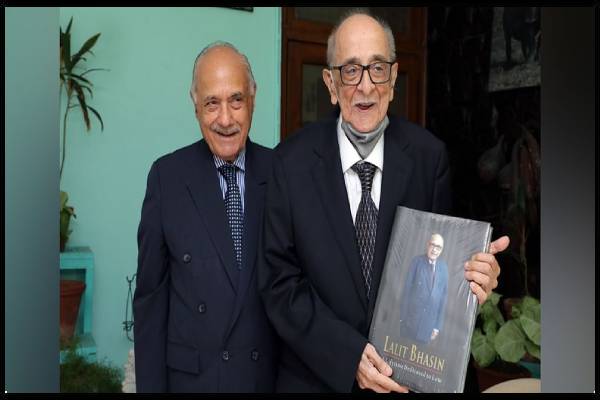 A pictorial biography on senior lawyer and Chairperson of the Society of Indian Law Firms (SILF), Dr. Lalit Bhasin, was released on 29 August 2020 by eminent jurist Fali S Nariman.

The coffee table book titled ‘Lalit Bhasin – A Lifetime Dedicated to Law’ was released at a function in Delhi. The book, published by Matrix Publishing Group, captures Bhasin’s life from his pre-Partition days as a child in Rawalpindi to his shift to Delhi and rise in Delhi legal circles.

Lalit Bhasin’s name is synonymous with outstanding leadership. His journey has been that of many achievements and milestones. He has relentlessly worked for the betterment of fellow advocates from the time he was elected as the Chairman of the Bar Council of Delhi, in 1973. Since then he has striven passionately and with vigour to promote the highest standards at the Bar.

Enriched with personal and professional photographs and replete with numerous interesting anecdotes, experiences and learnings of the distinguished 81-year-old lawyer, it is a compilation of his family, childhood memories, personal life and professional journey.

Dr. Lalit Bhasin started his law practice in 1962 and has developed Bhasin & Co. as one of the largest law Firms in North India. He was awarded Honorary Membership of the IBA in Melbourne in 1994 for outstanding service to the legal profession. He has been at the forefront of promoting interests of law firms in India through SILF, which was founded in 2000. He has been conferred the Degree of Doctor of Laws (LL.D) Honoris Causa by University of Rajasthan.

According to him, the book is dedicated to the legal profession and lawyers of the country.

According to him, life was not a bed of roses after Partition when he and his family were uprooted from Rawalpindi. What he has tried to convey in the book is that one can start from scratch and yet achieve one’s goals if one has the mission in mind and work towards it.

“This is an excellent book and makes for a very interesting read,” Fali Nariman said at the launch.

Dr. Bhasin said that his mission has been to give back to the society and to help legal professionals, particularly the junior members of the bar who might not have libraries or resources. He also intends to make the Indian legal profession known throughout the world. We have been able to do that through the Bar Association of India and through Society of Indian Law Firms which have placed India on the world map of the legal profession. According to him, Indian lawyers are now considered as second to none. He said that he is very happy to see India’s legal profession emerge as a force to reckon with.