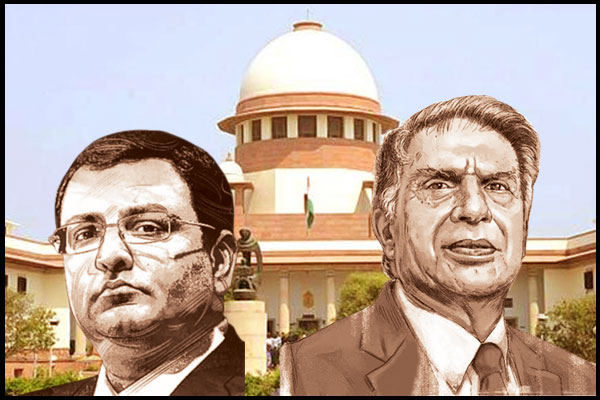 The Bench of Chief Justice of India Sharad Bobde and Justices AS Bopanna and V Ramasubramanian also directed the SP Group to maintain status quo and not take any action as regards the shares already pledged.

Tata Sons moved an urgent application before the Supreme Court on September 5 to restrain direct or indirect pledge of shares by SP Group in their Rs. 3,750 crore deal with Brookfield.

Tata Sons had alleged that SP Group will violate several provisions of the Articles of Association (AoA) by pledging its shareholding in Tata Sons to a third party. These provisions include Article 57 (restricts the right to transfer the shares of Tata Sons), Article 58 (notice of transfer) and Article 59 (procedure of transfer).

Tata Sons further argued that in order to create such a high value pledge in this manner, without informing the Tata Sons and seeking leave of the court is in absolute derogation of spirit of the court's earlier order.

Senior Counsel Harish Salve representing Tata Sons informed the Court that if SP Group wishes to sell the shares, Tata is willing to buy them. However, SP Group had instead chosen to pledge them for raising funds.

Salve said that in the event of default, the pledged shares will be placed on the block for being sold and if a third party offers to pay a premium, Tata Sons would have no choice but to match the higher price.

Senior Counsel Aryama Sundaram appearing on behalf of Cyrus Investments, contested the argument and said that the AoA bars a transfer of shares, and not their pledging.

CJI Bobde noted that it has been held on various occasions that pledging is in fact a limited transfer itself. The Bench also noted that the matter needs to be heard at length for final disposal, and proposed to place the case for final hearing after four weeks.

The Court was also informed by Senior Advocate Janak Dwarkadas, appearing for Cyrus Mistry along with Aryama Sundaram that the restructuring of the company was scheduled shortly, and that the company had to disburse salaries of a number of its employees and migrant workers.

The Supreme Court directed that status quo be maintained on the aspect of transfer and pledging of shares by SP Group. It added that the SP Group ought not proceed further or take action on the shares already pledged thus far.

The case will be heard next on October 28.