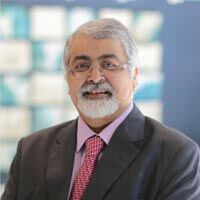 Mr. Shardul S. Shroff is the Executive Chairman at the Firm. He has over 38 years of experience in General Corporate, Mergers & Acquisitions, Insolvency and Bankruptcy, Securities Law, Disinvestment & Capital Markets. Mr. Shroff heads the Insolvency & Bankruptcy practice at the Firm. He is a leading authority on matters related to Corporate Governance, Mergers & Acquisitions, Government Regulation and Bankruptcy & Insolvency Law. He has been instrumental in developing these practice domains in the Firm.

Widely regarded as a pioneer in the field of Corporate Law, Mr. Shroff has participated in the training and drafting of several important economic legislations and company law reforms in India. Most recently, he has been a member of the Insolvency Law Committee, constituted by the Government to review the implementation of the Insolvency and Bankruptcy Code under the Chairmanship of Mr. Injeti Srinivas. He was also a member of a committee constituted to review offences under the Companies Act and the Injeti Srinivas Committee on cross-border insolvency. Under Mr. Shroff’s leadership, the Firm has been recognised as ‘Best in Insolvency’ at the Asialaw’s Asia Pacific Dispute Resolution Awards 2018.

As a preeminent expert of his field, Mr. Shroff has been appointed as an independent director on significant boards of Indian companies. He is a member of the US-India Business Council, Vice Chair of the Corporate Counsel Committee of the IPBA Council, the Union Internationale Des Advocats, and the Indo-German Chamber of Commerce. Mr. Shroff is also the Chairman of the CII National Committee on Legal Services. With regard to FICCI, Mr. Shroff is the Chairman of the Committee on Stressed Assets and a member of the Capital Markets Committee. Mr. Shroff has also been appointed as the Senior Vice President on the Society of Indian Law Firms (SILF).